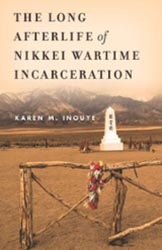 The Long Afterlife of Nikkei Wartime Incarceration reexamines the history of imprisonment of U.S. and Canadian citizens of Japanese descent during World War II. Karen M. Inouye explores how historical events can linger in individual and collective memory and then crystallize in powerful moments of political engagement. Drawing on interviews and untapped archival materials—regarding politicians Norman Mineta and Warren Furutani, sociologist Tamotsu Shibutani, and Canadian activists Art Miki and Mary Kitagawa, among others—Inouye considers the experiences of former wartime prisoners and their on-going involvement in large-scale educational and legislative efforts.

While many consider wartime imprisonment an isolated historical moment, Inouye shows how imprisonment and the suspension of rights have continued to impact political discourse and public policies in both the United States and Canada long after their supposed political and legal reversal. In particular, she attends to how activist groups can use the persistence of memory to engage empathetically with people across often profound cultural and political divides. This book addresses the mechanisms by which injustice can transform both its victims and its perpetrators, detailing the dangers of suspending rights during times of crisis as well as the opportunities for more empathetic agency.

“The Long Afterlife of Nikkei Wartime Incarceration contributes to the sparse literature on the lingering effect of the World War II incarceration experience on Japanese Americans, their children, and their grandchildren. Karen M. Inouye uses Avery F. Gordon's concept of ‘haunting’ to analyze the ‘long afterlife’ of incarceration in novel ways (Gordon, Ghostly Matters, 2008). Different from trauma, haunting allows one to envision how things might have been, creating a moment in which those who have suffered are moved to create a difference in the present and the future.”